Yesterday I went to Brookhaven Labratory for a homeschool science class on soil with my friend.

Soil is made out of gravel, sand, silt, and clay.

Gravel is the biggest part of soil.

Clay is the smallest.

A tool called the sieve separates the gravel,sand, silt, and clay. 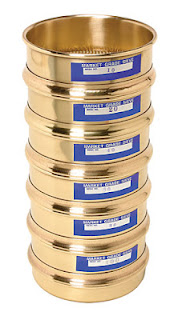 My first experiment was putting rocks into groups (not Igneous, Sedimentary, and Metamorphic.).

I came up with, dots, plain color, and stripes.

My second experiment was was with 2 rocks. My tools were a magnet and a piece of paper with some thing on it.

The clear rock on one side could make things bigger! The other rock was magnetic!

My third experiment was weighing, measuring the volume, and drawing samples of dirt.

After that, I went home.