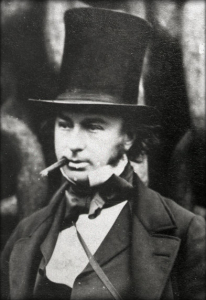 Isambard Kingdom Brunel was a Victorian engineer and architect who desinged bridges and tunnels. He invented the suspension bridge, and used the method people still use today to build tunnels. He built the Thames tunnel by starting at the soft ground by the Thames, using something like a cookie cutter to go into the ground. In the ground, workers used a tunneling shield to drill through the ground, while an arch of bricks was made to support the ground. Isambard also made the Great Western Railway and some tunnels along the way (such as the Box tunnel at Bath). His Thames tunnel is still in use by the London Overground from Rotherhithe to Wapping. He also made docks in the Docklands of London. He is also famous for making the Albert Bridge on the side of Battersea Park.