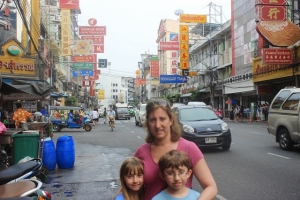 So my last stop before returning to New York was Bangkok.

We went to the Antara hotel and ate at a place in… Bangkok’s Chinatown. The steamed buns were really good, especially the sweet ones. Afterwards, we headed toward the MBK, a massive shopping mall. Then we went to the Asiatique riverfront plaza. Pooped, we took a ferry back to our hotel.

We ate a delicious breakfast (nom nom nom… danishes!), and headed to the Museum of Siam. It was a really cool museum, and I liked it a lot. Afterwards we headed towards a temple, then went back to the hotel for the pool. For dinner, we headed back to Asiatique. Then we went back to bed.

We went on the monorail to the 85-story Baiyoke Tower. There were great views, but Chrissy was more interested in her book. We took a tuk tuk ride to the Jim Thompson House, where this guy who pioneered silk from Thailand to the world lived. Then we had a little break at the hotel, because after we went to a 2-hour Dinner Cruise. On the boat, I felt a little bit woozy. Was it a wave of homesickness? Had I eaten some bad pad thai? Whatever it was I felt really sick for the rest of the trip. Afterwards, we went to the airport. The plane ride home was brutal. Even though Thai Air is really nice airline, I couldn’t sleep and had to go pee every 15 minutes. But we had buisness flight class tickets home from London, because we had to stop in London for a connecting flight. However, the buisness class on British Airways was even worse then the peasant class on Thai Air. The food was horrible, and they had no good movies. So I slept for most of the ride. When I woke up, we were almost there. Was it true? Was my beloved home only 2 hours away? We landed at JFK airport and returned to my long-lost home. I had a great expierience in London, and I hope to travel again soon.