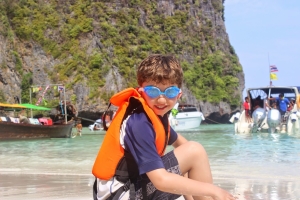 So after my relaxing time in Chiang Mai, me and my family went to Chiang Mai International Airport, and had 2 hours to kill. My mom got some egg yolk bean paste, she said it looked really good. One long flight to Phuket later, we arrived in Phuket Airport. After a 45 minute cab drive, we arrived at our hotel, the Centara Grand Phuket. It was really family friendly, and me and my sister had two waterslides, a lazy river, a hot tub, a pool, and a cliff jump for leisure. So my mom checked us in, and then we were brought to our room. Everybody unpacked, and mom tried the egg yolk bean thing, and it turned out it was awful. After unpacking, I went to the pool with my sister and my mom. Afterwards, me and my family ate at one of the hotel’s various restaurants. Then we went to bed. The next day, me and my sister just went in the pool, on the cliff jumps, and down the waterslides. Then my parents dragged me and Chrissy “into town” for dinner. Then we went back to the hotel and went to bed. The next day we got up early for a speedboat tour. It was really fun! We got to go snorkeling! But somebody accidentally dropped their GoPro into the water. When we went home, we were really tired, so we went to bed. The next day was just like the second day. On the next day, we went… not home… but to Bangkok!